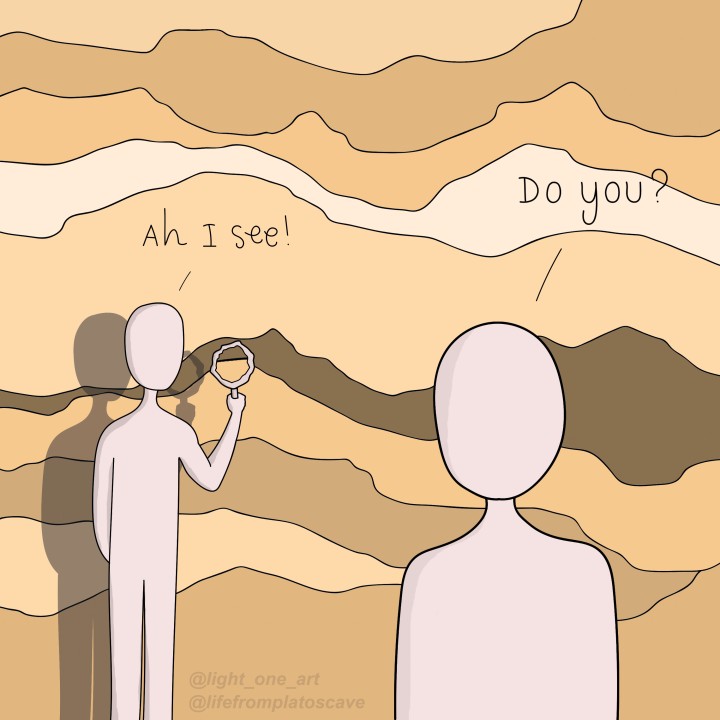 The eco-consciousness and climate crisis theme in my Life From Plato’s Cave podcast is becoming quite strong, although I did not originally plan it that way. But I focused on the question of what it means to grow and develop in this life on Earth, so perhaps it is not surprising that the greatest challenge of our time comes up.

I’d like to expand on this a bit here and point you to the episodes which you can find at www.lifefromplatoscave.com.

In Episode 3, Mieke Bal and I discussed her film “It’s About Time! Reflections on Urgency” (freely available at http://www.miekebal.org/artworks/films/its-about-time/). In her exhibition about this film, Mieke makes the connection between the figure of Cassandra, who has the gift of foreseeing the future but the curse of never being taken seriously, and Greta Thunberg. At present, there are many Cassandras in our society and although there is a lot of ‘greenwashing’ going on, they are not taken seriously to the extent that they should.

In Episode 5, I spoke with geologist Marcia Bjornerud about her concept of Timefulness. From a purely scientific view, many of the conditions of our planet (its geology and its atmosphere) were present just before some of the most dramatic climate emergencies in the past. Sometimes people say, ‘yes, but the climate has always been changing’. True, from the perspective of our planet. But look at what happened at those points in our planet’s 4.5 billion year history when erosion, mass extinction and global warming spiked: in the best case scenario, it is followed by a ‘short’ period of global geological and climate instability (warming, sea level rise, earthquakes, volcanic eruptions, hurricanes). But ‘short’ from Earth’s perspectives means tens of thousands of years for human history. The sense of urgency (see Episode 3) that would be a healthy response to this message from science is missing, and it would be aided by a sense of timefulness – awareness of how our human timescale relates to our planet’s.

Why? In Episode 6 with ernst van alphen we might see one of the fundamental reasons. After returning from the surface, the prisoner in Plato’s allegory of the cave is unable to communicate their insights to those who are living in the cave. In my conversation with Ernst, we discussed how the degree to which insights/experiences (affect) can be communicated with others depends on the symbolic order, i.e., the type of conversations we have in society. Urgent messages such as by geologists and climate scientists do not ‘communicate’ because they are filtered by the way we are used to discussing topics in our society. In The Netherlands, at least, this is through debate rather than dialogue, and from the perspective of political stake rather than looking for shared goals and common ground. Put simply, the conversations in our society need to be “upgraded” in order for us to discuss urgent global issues such as climate change.

Finally, in Episode 10 (not yet released) I speak with Dominic Pettman, who makes a connection with climate that is not usually made. In a nuthsell: “For every gleaming white iPhone or hybrid car, there is a steel drum of poison-pitch produced out of sight and out of mind.” And “as the climate warms, it appears our libidos cool”. Pettman connects our collective libido – in the broad sense of desire, empathy, compassion etc – to athropogenic climate change. Technological innovation fuels climate change, but also the decline of empathy and compassion. He also diagnoses our condition as one of “infinite distraction”: we’re paying attention to social media rather than to what’s going on with our planet.

No doubt, this theme will grow in the coming episodes. But given these insights, how can we communicate about the state of our planet and our own role in this, in a way that contributes to growing climate consciousness?